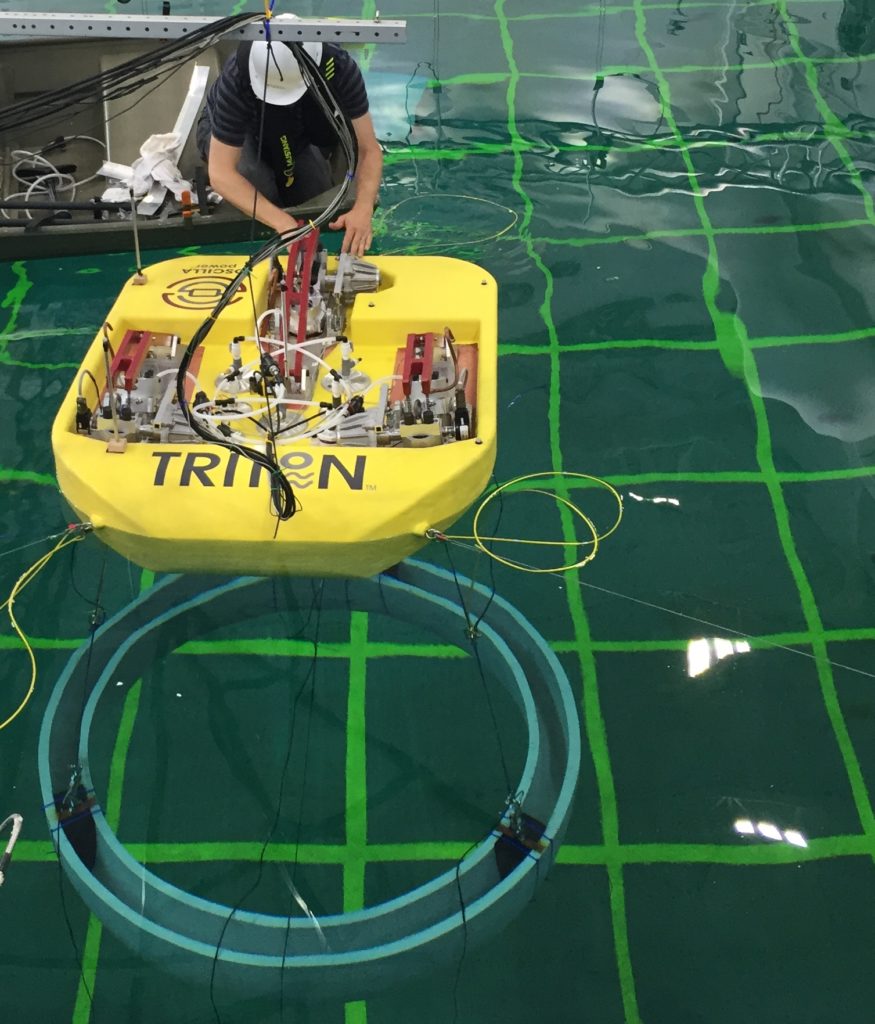 Oscilla Power Inc., is a Seattle based company in competition for the US Department of Energy’s Wave Energy Prize.  As a top finalist in the 1/50th scale round, Oscilla Power was ready to enter the next phase of the competition.  This required design, construction, and testing of a 1/20th scale model.  Given the compressed schedule and larger scale involved, Oscilla Power reached out to Einhorn Engineering for assistance with the project.   On-time production of the prototype was critical to making the upcoming Wave Energy Prize test date.

The Oscilla Power Triton Wave Energy System consists of a circular heave plate suspended by three lines to a moored surface float (or buoy).  On-board the float, each heave plate line is connected to a spring-damper set.  As a wave passes by the system, the buoy reacts strongly by heaving up whereas the shape and mass of the heave plate resists that upward motion.  The resulting differential motion increases the line tension, which is used to generate power.

The 1/20th scale model simulated the generator system with an air spring and dashpot system.  We began with Oscilla’s initial concept and worked closely with their engineering staff to develop an optimized, reliable, and cost-effective design.

The final assembly of the buoy needed to have finely tuned mass and hydrostatic properties to achieve ideal performance.  After reviewing a variety of construction techniques, we opted to build the float with a closed cell foam core.  To maintain the float properties the original construction concept used multiple density foams assembled to give the required float properties.  Early fabricator quotes for this approach far exceeded our customer’s budget.

Einhorn Engineering iterated the design as shown below, arriving at a design using a light weight closed cell foam core covered in a laminate composite shell.

Combining this design with the unique fabrication capabilities of Janicki Industries enabled us to produce a final hull form that met all the performance criteria and provided a significant cost savings.  Janicki’s large gantry 5-axis mill was capable of machining a monolithic hull form from one large block of the foam material, as shown. 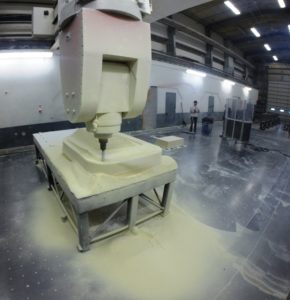 We started the project with an initial set of components for the spring-damper set.  We provided concepts for integrating them to the surface float and heave plate system, including a mounting frame to transfer the load.  After testing those components, Oscilla concluded the arrangement wasn’t feasible, and selected alternatives.  Einhorn Engineering then returned to the drawing board and presented Oscillla with options to integrate the new suite of components to the heave plate line and to the surface float.

The final arrangement was a culmination of Oscilla Power and Einhorn Engineering’s design efforts.  Oscilla selected a linear air spring damper and a rotating dashpot.  The challenge before us was to couple the two.  We achieved this by utilizing a lever and sheave system. 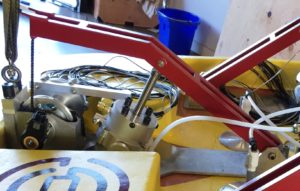 We engineered the necessary components including a custom sheave, a sheave pin that couples to the dashpot, a lever system, and brackets.  To complete the design, we selected off-the-shelf components such as bearings and sprockets.  Additionally, Einhorn Engineering supported Oscilla by engineering two sizes of air spring tanks using the ASME Pressure Vessel Code.

We believe our support has positioned them to be successful in the final round of the competition.  We look forward to working with them in the future on their full scale design.